After concerned parent Carleen Cullen saw the movie “An Inconvenient Truth,” she was inspired to make a difference in her community, starting with K-8 students. In 2006, Cullen and her husband Jeff developed a conservation program, Cool the Earth, that educates K-8 students about climate change, brings them hands-on learning and provides them with knowledge and tools to practice sustainable energy use. In 2008/09 the program ran in 67 California schools as well as 20 schools across the country. During this time, the program raised climate change awareness in over 23,000 students and 10,500 families and helped reduce carbon emissions by over 37 million pounds, which is equivalent to taking 3,000 cars off the road for a year.

During the 2009/10 school year, Cool the Earth plans to reach 125 elementary schools throughout California with their program. They expect to engage over 50,000 kids and their families who are expected to take over 80,000 actions to reduce their carbon emissions by over 43 million pounds.

What Actions Does Cool the Earth Take to Implement Their Program?

Cool the Earth Inc.’s primary goals are to raise climate change awareness and sustainable energy practices among K-8 children and their families, and empower and inspire students and families to reduce greenhouse gas (GHG) emissions through simple low or no-cost actions taken at home and school. To do this, the nonprofit provides a ‘ready-to-run’ program that is implemented by volunteer program coordinators in schools. The program launches with a school-wide assembly featuring an original, age-appropriate play to educate children about global warming. Students then go home with a coupon action booklet that lists 20 no-or-low-cost energy efficient actions. These coupons highlight the corresponding carbon savings of each action. Actions include things like switching to energy-saving CFL bulbs, recycling waste, buying items with less packaging, and taking shorter showers to conserve water.

How Does Cool The Earth Keep the Program Going?

To ensure that these environmental practices become part of participant’s everyday living, the families and children aged 5-13 commit to taking actions over the entire school year. The coupons are completed and sent back to school, where they are tallied, tracked and displayed on a tracking banner to the entire school community. The banner illustrates to the school community that collectively their actions significantly impact climate change. They also track actions taken by the whole Cool the Earth community on their website to spread the understanding that individual actions have a significant impact. The school then participates in 2 to 4 actions of the month. These provide in-depth hands-on learning about specific energy-saving actions found in the coupon book. Additional information is sent home through school-to-home communication channels before and after the on-campus activity highlighting the specific carbon-saving action.

How Successful Has Cool The Earth Been?

From its start in two elementary schools in 2006, the program has now grown to include a whopping 125 schools and 85 Girl Scouts troops. Since its inception, Cool the Earth has reduced carbon emissions by over 80 million pounds and spread environmental awareness to thousands of children and families in the community.

"Cool the Earth plants the seeds of environmental change into the minds of the people who can have the biggest impact on the planet: children. If anyone can inspire their parents to make changes, it’s their children." - Carleen Cullen, Co-Founder and Executive Director 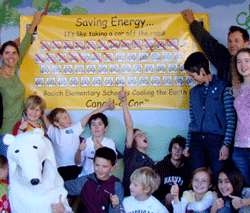