Built in the 1950s, but newly remodeled, the owners of Capitol Bowl have taken steps to attract more customers and lower their carbon footprint. Capitol Bowl’s activities include open bowling, organized leagues, birthday parties, and company celebrations. The restaurant in the facility prepares everything from scratch and is open for lunch and dinner. In the past three years, the owners have transformed an old, inefficient building into an energy-smart, water-conserving, beautiful bowling center and restaurant.

Capitol Bowl remodeled the inside of their building, which contained little rooms built inefficiently. To reduce trash and keep Styrofoam® out of the landfill, they stopped using disposable plates and utensils, and switched from Styrofoam® to cardboard takeout containers. They then remodeled the outside of the building to include a patio with a xeriscape garden and added blinds on the windows to help keep the interior cooler. In 2014, Capitol Bowl took their efforts up a notch by adding rooftop solar, switching the parking lot lights to led, and starting a water conservation program.

Capitol Bowl’s biggest efforts to date have been the installation of energy saving features, such as efficient natural gas kitchen appliances, rooftop solar, and led parking lot lights. Before the energy renovations, their utility bills averaged $7,000 a month for electricity and gas. After the renovations and when the rooftop solar (PV system) went live, their monthly bill fell to about $1,800. As a bonus, the PV array shades the building’s flat roof, which keeps the interior cooler.

Capitol Bowl’s efforts don’t stop at its green building features, they support internal and external outreach projects to promote sustainability. They encourage employees to bike to work and source food from local farmers. The manager is a board member on the West Sacramento Chamber of Commerce, participates in the City of West Sacramento’s sustainability efforts, and volunteers every week at the local farmer’s market. She frequently speaks with other businesses about measures they can take to reduce their carbon footprint, including referring them to the CoolCalifornia.org website and the Air Resources Board's Ombudsman website for help, advice, and resources.

Capitol Bowl is a leader in its progressive actions, and Sacramento’s public television station, KVIE, covered the business’s remodeling efforts during the economic downturn on a show called “Yes, We’re Open” TV show! 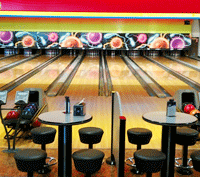 Capitol Bowl is a small, family-owned bowling center with a full-service restaurant and bar.