Atlas Disposal Industries was founded on the principles of sustainability. People, planet and prosperity are the three principles that define the way they do business. Guided by these core values, Atlas has quickly emerged as the fastest growing waste and recycling hauling company in the Sacramento area. They strive to respond to urgent environmental challenges such as water conservation, waste reduction, and clean air.

Since 1996, Atlas Disposal has provided Sacramento region residents and over 2500 businesses with superior recycling and waste collection service with a focus on clean transportation. Atlas has been a pioneer in the use of clean fuel vehicles since early 2000. Their goal to operate the largest fleet of clean fuel vehicles for any privately held solid waste and recycling hauler in the greater Sacramento area was met in 2010, and they’re not stopping now. In fact, Atlas Disposal recently purchased four new compressed natural gas (CNG) vehicles in 2011, bringing their fleet to 25 percent CNG.

Through their clean vehicle efforts, Atlas Disposal has calculated (using the CoolCalifornia Business Carbon Footprint Calculator) that for each vehicle converted from diesel to CNG, their carbon footprint was reduced by 1 ton of carbon dioxide. These findings have confirmed Atlas’ commitment to the conversion of their fleet and have helped “fuel” their efforts to convert the entire fleet.

How has Atlas Disposal helped to increase business climate actions within its service area?

In 2011, Atlas launched a compostables collection system that takes materials such as fruits, vegetables, soiled paper and other materials that are considered organic. The materials are processed into compost for use in commercial and residential applications. Their successful participants include local schools (elementary through college), grocery stores, large chain restaurants and other small businesses that generate organic waste. Businesses that participate in the program are able to divert an additional 30 percent of their disposed waste. For those who generate between 4 and 8 cubic yards per week, they are able to achieve a carbon footprint reduction of 1 to 3 tons (carbon) per year.

What outreach efforts does Atlas Disposal make to raise awareness?

Atlas Disposal takes an active role in getting the community passionate about recycling and composting in local schools, grocery stores, chain restaurants, and other small businesses. They have created a sustainability focused team that works to educate local businesses and residents on their recycling potential. Atlas launched an advertising campaign centered around waste reduction, composting, and the use of clean fuel vehicles. Education materials are distributed and they cosponsor outreach events with the Rental Housing Association (RHA). They also partnered with the RHA and the City of Rancho Cordova to expand their multi-family recycling program.

Atlas’ employees live and work in the surrounding community and each takes an active role in supporting and communicating the benefits of resource conservation. 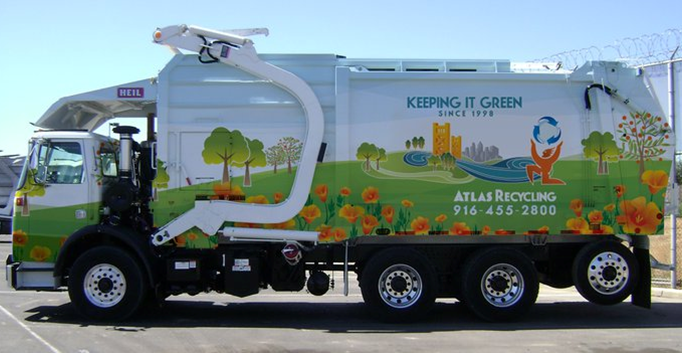 Other awards and Recognitions: