Zan Media, San Francisco Bay Area film and video production specialists, caught the green buzz when producing their recent documentary on the California wine business, “A State of Vine”. Says partner/producer Christine Scioli, “We devoted a segment of the documentary to sustainability and saw time and time again the efforts made in the wine industry to become environmentally sensitive. It dawned on us that we took similar steps in the film and video business by becoming a 100 percent digital production company.”

In the past, shooting on 35 or 16 mm film, the company was required to utilize much larger film crews with grip trucks, generators, energy wasteful HMI (hydrargyrum medium-arc iodide) and tungsten lights that heat the atmosphere, as well as petrochemical based film and tape stock. Now Zan Media keeps crews small and efficient with excellent quality digital cameras and professional desktop editorial programs.

What Actions Does Zan MediaTake to Conserve Energy?

Zan Media made the switch to energy efficient appliances and lighting. The studio is now extremely energy efficient, with no lights used during daylight hours. When they do need to be turned on, all light bulbs are compact fluorescent lamps. This change led to an estimated 30 percent reduction in the comany’s electric bill. All other appliances are ENERGY STAR efficient.

What Actions Does Zan Media Take to Reduce their GHG Emissions?

The green media company now has only one company vehicle to transports their crew to shoots. This has reduced their company gasoline bill by approximately 60 percent, not to mention the reduction in carbon emissions.

What Actions Does Zan Media Take to Conserve Resources?

Zan Media’s biggest reduction in waste has been their transition to becoming completely digital. This entails no CDs sent to clients (all work is sent via email), reduced rendering time on projects (which reduced electricity costs), and sending out only electronic newsletters. As for the company’s on-site facilities, their restrooms have high-efficiency toilets and recycled-content toilet paper. Their company grounds have drought-resistant landscaping, which in tandem with their low-flush toilets, have reduced their water bill too. Zan Media is even becoming more sustainable by producing food for their employees. They have a company organic garden and they use the vegetables daily for lunches, which also promotes healthy eating and living. 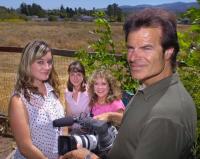