Following five years of a 10 percent annual growth, the owners decided to give back to their community and the world at large by undertaking an ambitious goal to become Antelope Valley’s first net zero electric building. A preliminary step in the process was researching their energy needs by using in-house technology. For example, they measured the illumination from the current lighting systems, roof temperatures, cycling time on the refrigerator, the wattage on the in-house public address (PA) system, and other systems.

As a result of assessing their energy needs, they invested in an $80,000 roof solar system of 60 panels. They also installed LED lighting, timers to shut off refrigerators, control systems that can place the building in a low power state, and additional insulation.

Furthermore, they modified the outdoor lighting times to coincide with astrological timing rather than a specific time, trained employees to shut off unused lights and systems, and serviced their five air conditioners. These actions and many others eliminated the need for utility electricity consumption and resulted in an additional 10% electricity generation as well as 40% brighter offices and laboratories. The total investment of energy efficiency renovations was $85,000 and an expected return on investment is three years, based on tax incentives and a decrease in the utility electricity bill.

Aside from Precision Labs Calibrations’ energy efficiency renovations, some of their other added sustainability features include dual flush systems on toilets, aerators on all faucets to reduce the flow, and ‘desertscaping’ gardening in front of the office. They placed a low power LCD monitor in the office lobby that shows the carbon savings the company has by day, month, and year as a constant reminder of their goals.

In order to help other small companies reproduce their success, Precision Labs Calibration created their own educational event celebrating Antelope Valley’s first Commercial Net Zero Electric Building. The event provided a tour of the building and was attended by 200 people, including Congressman “Buck” McKeon’ office, LA County Supervisor Michael Antonovich, State Senator Steve Knight, and Assemblyman Steve Fox. The event was broadcast by local radio and featured in the business section of the Antelope Valley Press newspaper. As a result of the event, at least two more small companies have gone solar. In addition, Terry Norris, CEO of Precision Labs Calibration has reached out to the City of Palmdale to create a certified green business program, with the goal of encouraging more companies to invest in eco-friendly business practices. 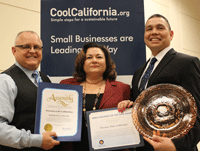