Clean Solar is a residential and commercial solar panel system installer offering a wide range of technology and financing options so home and business owners can reduce their electricity bills and generate their own clean, renewable energy.

As a solar installer in both the residential and commercial sectors, it is in Clean Solar’s nature to lower energy costs by reducing greenhouse gas (GHG) emissions. However, as they have lowered clients’ GHG emissions, they have also taken significant actions to reduce their own. At Clean Solar, they purchase recycled printer paper, toilet paper, paper towels, office supplies, office furniture, and compostable catering supplies. They have a printer dedicated to recycled paper (utilizing both sides of a page before recycling it); they recycle toner cartridges; have designated bins for recycling paper, cardboard, plastic, glass, metal, and composting; and they use real dishes and utensils instead of throwing away or recycling paper or plastic items.

Clean Solar has also made tremendous strides to reduce electricity usage at their headquarters in Santa Rosa. These actions have resulted in saving over $100 in business expenses per month. To be more efficient, the business reorganized solar installations teams, so that instead of running 4 vans with 3 installers each, there are now 3 vans running with 4 installers each, driving one less van without compromising quality of work. This change has reduced mileage by about 70 miles per week, resulting in a reduction of approximately 200 pounds of carbon dioxide a week since June 2015.

Using tips from the CoolCalifornia website, Clean Solar consolidated tasks to reduce the number of vehicle trips needed. Instead of waiting a few days until there was an additional appointment in the area, the installation and sales teams re-organized to make several appointments in  one trip. They also used the Carbon Footprint Calculator on CoolCalifornia.org to reduce their GHGs by telecommuting to work, reducing waste, improving fleet fuel efficiency, and turning off lights.

In addition to replacing light bulbs with LEDs, they monitor and record their energy usage and have reduction targets for energy consumption through actions such as turning lights off in unoccupied rooms and controlling air conditioning and heating settings. With Networkfleet software, they monitor their vehicle greenhouse gas emissions and plan trips to use less fuel, reduce emissions, and save money. They have also worked with their landlord to implement energy efficiency improvements.

Clean Solar’s green efforts extend beyond the office and into the local community. They have been involved with the Adopt-A-Highway Program for the past seven years, cleaning up a portion of Highway 87. For every installation, they donate $150 to a charity in the name of the customer and, since 2007, have donated more than $200,000 to local charities including many focused on the environment (e.g., The Sierra Club, World Wildlife Fund, 350.org, and The Nature Conservancy).

“Whether it’s one or two actions or a bunch of little things, the key is doing those things every single day.” - Randy Zechman, Co- Founder, Clean Solar 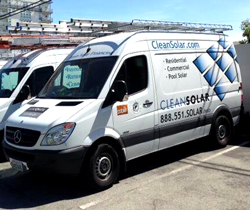 Clean Solar is a residential and commercial solar panel system installer hat offers a wide range of technology and financing options so home and business owners can reduce their electricity bills and generate their own clean, renewable energy.