From Garbage to Garden

At Arroyo High School, five students led by 2011 Cool California Climate Champion Elaine Lac, started composting in order to produce a viable alternative to commercial compost for the school to utilize. Composting reduces the amount of waste that is sent to the landfill while providing a nutrient rich soil to be used in a garden.

After distributing fliers to 50 homes, the students collected organic waste from neighbors and friends. In all, 353 pounds of compostable material was collected and carted away on a wagon, minimizing the carbon footprint of the project compared to driving a car to pick up the organic waste.

The students built two receptacles to hold the compost and diligently worked to find the most efficient mixes of organic waste. They performed weekly tests to monitor the pH and other nutrient levels with guidance from the school’s science department. The students compared greenhouse gas emissions from the compost versus commercial fertilizers previously used by Arroyo High School.

High quality compost requires warm weather and time, but since the school year was rapidly coming to an end and the weather was cool and wet, the students were forced to be creative. Covering the compost bins with plastic tarps created a warm and dry environment. The addition of water and worms helped the compost decompose more quickly.

What kind of waste is the best to compost?

Organic materials are the best because as it decomposes no harmful chemicals are leeched into the ground, potentially being released into the ground water supply or the plants being grown using the composted fertilizer. Many household items can be composted like coffee grounds, tea bags, paper plates, food scraps, egg shells and garden waste like flower and grass trimmings. Groups around campus, like the woodshop or the cafeteria and maintenance crew, may be able to donate saw dust or food and garden waste.

Why is it so important to use organic waste?

Organic waste creates a safer fertilizer when composted because there is no risk of chemical contamination in the soil. The richer and healthier the compost material is, the more nutrient rich the soil will then become. Also, there is no chance of chemicals leaking from the compost into ground water, making it safer for humans and allowing for the ecosystems to remain safe.

Whose idea was it to create a compost?

Elaine Lac, Climate Champion, and Andy Shen, Miller Dial Young Innovator Scholarship recipient, led the effort to generate compost to work as fertilizer. Lac is said to have “much promise in the environmental field” by an advisor on the project, as she has a firm grasp of climate change and the effects. After being awarded the Miller Dial scholarship, Shen spoke about the project saying. “ [The scholarship] recognizes a project that emphasizes bringing the community together and eventually educating the community about sustainability.”

How can high schools become involved?

Host fundraisers at school to help with the building material costs while also informing the student body about the project and how it will help the environment. Students and parents can also help with the donation of waste to create the compost. Science classes can help monitor the pH and nutrient levels in the compost to maximize the compost quality. A project like this is also a great opportunity to invite guest speakers to speak on related environmental topics, such as alternative/renewable energy and simple ways to lessen personal greenhouse gas emissions. 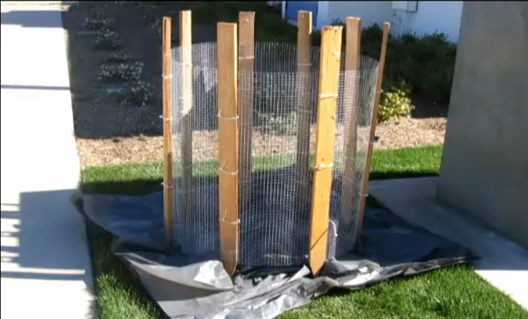 The cylindrical compost bins used in the From Garbage to Gardens project was constructed by students under the supervision of teachers. The design was picked because of the cost efficiency to build and ease of construction. These students built compost bins at school, collected organic waste from local businesses and households, and used the compost to fertilize a school garden. It's very well-documented in a video they created and their monitoring of the compost was analytical and thorough!

Reductions can be compared to: