The beach town of Santa Barbara has committed to reducing its greenhouse gas (GHG) emissions through an innovative use of technology and green policies for employees.

To help produce the energy needed to operate its waste water treatment facility, the city has worked with the El Estero Waste Water Treatment Plant to install a cogeneration engine unit. The engine captures heat generated by the various pieces of equipment and produces energy used to power the machines. Compared to a coal burning unit, the cogeneration engine reduces carbon dioxide (CO2) emissions by 3,056 tons per year, equal to removing 578 passenger vehicles from the roads.

Santa Barbara has worked hard to convert city vehicles to more sustainable means of operation. There are nearly 200 vehicles in the fleet ranging from biodiesel to hybrid electric, compressed natural gas and ethanol fuel. In addition, the city has been able to sell four cars due to a vehicle carpool program that encourages ride sharing. The city also sends employees to driver’s education training to improve fuel efficient driving.

Commuter benefits, such as free local transit passes and commuter subsidies for longer trips taken on public transportation, are offered to city employees to encourage alternative methods of transportation. The city offers an annual safety classes and free helmets to bike commuters along with Bike Station memberships and bicycle tune-up subsidies. Through the Work Trip Reduction Incentive Program, over three million commuter miles have been eliminated by employees since 2007.

What actions is Santa Barbara taking to conserve energy?

What actions is Santa Barbara taking to use Solar Energy?

The city of Santa Barbara is installing solar panels on a number of city buildings, choosing to lead the city by example. Solar panels at the City’s Corporate Yard produce 87 percent of the energy needed to run city parks, community development and public works projects. PV solar panels have been installed at Fire Station No. 2 and produce half of the energy consumed. The Corporate Yard and Fire Station will reduce carbon emissions by 404 metric tons, providing electricity to over 50 homes.

What actions is Santa Barbara taking to promote green transportation?

The City of Santa Barbara encourages employees to carpool to work, reducing the number of vehicles on the road. In addition, the city has converted the fleet of city vehicles to a combination of hybrid, electric, compressed natural gas, and diesel to reduce green house gas emissions. Many employees are on a flexible work schedule allowing for a reduction in driving during congested hours, which reduces idling cars. When traveling to city meetings, employees are encouraged to walk, carpool or ride a bicycle provided by the city of Santa Barbara.

Santa Barbara has committed to becoming a pioneer in green community practices, creating a city that works together to protect the environment. 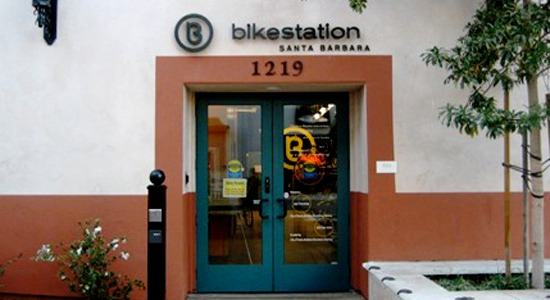 In downtown Santa Barbara, conveniently located near City Hall, a bike station allows for citizens to ride a bike into town and still have a safe place to store it. For a small fee, members can access the bike storage, locker room and maintenance equipment, which encourages bicycling as an alternative to driving.