Crown of the Valley

As a large urban community known for its chic lifestyle, Pasadena is committed to going green through massive energy and water use overhauls, along with encouraging the use of alternative transportation methods like improved bus lines and bike paths.

One energy efficiency improvement was Pasadena’s first building-integrated photovoltaic (BIPV) solar system, installed on the Lake Avenue Metro Gold Line station in 2010. The canopy roof features a 20kW system generating 30,000 kWh of electricity a year, enough to power 6 homes. Pasadena has adopted an energy use reduction goal to decrease demand by 3MW per year. This will be accomplished by installing more solar panels on public buildings and performing energy use audits to prioritize reduction efforts. Over 200 local businesses have participated in energy audits provided by a local non-profit in conjunction with the city of Pasadena. The audits are designed to target unnecessary electricity use.

To address wasteful water use practices, an aggressive water conservation effort has taken place across the city. This effort aims to decrease per capita water use by 157 gallons a day, a 15 percent reduction compared to 2009 water use. Public water use for parks and traffic medians has also been reduced by 20 percent, while the water used for landscaping purposes has been converted to a recycled water system.

City transportation has also undergone changes to ease congestion. A “road diet” was implemented to slow traffic and increase room for bikes. The city also received a grant to improve pedestrian safety at intersections as a part of an effort to create a walkable community. In 2011, a Bicycle Master Plan was finalized detailing future actions to create a safer and more accessible bicycling community within Pasadena.

How has Pasadena created green jobs?

The city of Pasadena’s Economic Strategic Plan identifies and supports the green job effort to stimulate business, industry and green technology. Focusing on low-income areas, the Maintenance Assistance and Services to Homeowners (MASH) Program provides job training to low-income and at-risk youth living in Pasadena to improve neighborhoods, provide housing and rehabilitation and lead stabilization efforts. The participants are trained in waste reduction, recycling, water and energy efficiency, urban revitalization and disaster response. In 2010, 40 trainees participated in the program, 37 were hired for temporary positions, and four have found permanent jobs within the program.

What is Pasadena doing to promote alternative transportation?

In 2011, the city altered its Bicycle Master Plan to champion for recreational and commuter bike use while promoting increased safety, parking, and a network of bike paths. To further increase safety, the city of Pasadena sought and received a $114,000 grant to increase traffic signals and warnings at pedestrian crosswalks. Through a variety of programs, Pasadena has increased its residents’ quality of life, measured by factors like air and water quality, ease of transportation and overall well-being.

Pasadena has gone to great lengths to replace inefficient lights with LED bulbs at 26 city facilities, on 100 street lamps, and swapped incandescent bulbs with LED bulbs on exit signs, saving enough electricity to power over 112 homes for a year. The City Hall courtyard fountain has been updated to use an efficient water pumping system, reducing greenhouse gas emissions equivalent to 1.6 cars per year. Smart Grids were also installed on residential properties to help monitor energy use and relieve peak-time pressure on the system. Partnering with the community, Pasadena has an overall electricity reduction goal of 10 percent by 2012.

Civic and municipal cooperation has led to a safer and more sustainable atmosphere in Pasadena. Programs are continuously being implemented in order to improve air and water quality in the Southern California valley. 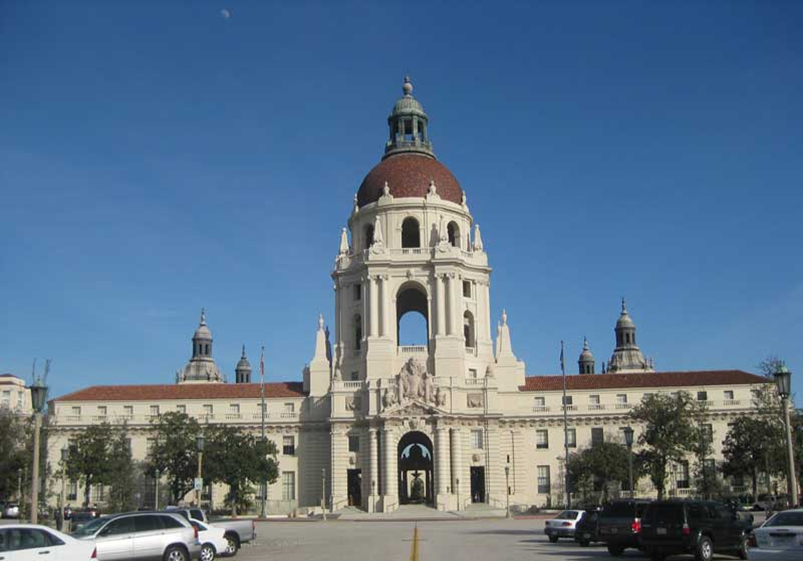 Pasadena City Hall has obtained a LEED certification of Gold, providing the city with an environmentally friendly public services building.