The city of Irvine has found its calling and become an innovative urban metropolis focused on reducing the carbon footprint of both its residents and its municipal operations. The city plans to achieve significant carbon reductions through a few key strategies: green building standards, energy efficiency retrofits, and a zero waste future.

In order to reduce the city’s building energy use 30 percent by 2015, the city of Irvine concluded that all new construction of municipal buildings must receive a LEED certification of Gold, and will exceed state energy codes by 20 percent through the use of day lighting-- eliminating the need for artificial light. New facilities in the city will also have on-site renewable energy systems to help produce the electricity necessary for operation.

Energy awareness programs are offered to educate workers on simple ideas around the office to reduce wasteful energy consumption, like fully shutting off computers at the end of the day or turning off lights when leaving a room. These efforts and more will ease municipal energy use by 50 percent.

A zero waste ordinance was adopted by Irvine in 2007, mandating the most efficient use of resources to reduce waste as much as possible. This involves eliminating the production of potentially wasteful products, like excess packaging. Currently, the city has a 56 percent diversion rate of waste generated within the city. The city is also working to divert the 20 percent of food waste in landfills that could be composed. One of the strategies is to strongly encourage residents to compost food scraps for use as fertilizer in gardens.

What is Irvine doing to reduce energy use?

The city of Irvine’s Green Team works to connect residents with sustainable ideas and programs like the aggressive recycling program. Residents are encouraged to install low-flow shower heads, computer controlled thermostats and insulation on water heaters. In addition, incentives and rebates are offered for larger projects like purchasing solar panels.

The city’s Transportation Center is also home to a photovoltaic system providing clean energy for the city to use.

How is Irvine encouraging alternative modes of transportation?

Irvine has many policies to encourage bicycling rather than driving. For city employees, a flexible work schedule is offered to cut down on time spent idling in traffic. Employees also have access to car and vanpools, as well as ride sharing resources.

The city is also working to improve bicycle transit. At bike trip destinations, like community and transit facilities along with commercial centers, bike storage and showers are provided to riders. The city has improved traffic signals to include allowances for bikers to turn, cross streets, and move through traffic. Off-street bike paths with minimum cross traffic have been created to further protect cyclists. In addition, the city supports programs to increase public and rider awareness of safe habits when sharing the road.

Irvine is improving it’s own vehicle fleet as well as implementing land use requirements to reduce transit related GHG emissions. New construction must have a plan for public transportation access and be carried out. The city vehicle fleet is being converted to use alternative fuels and GPS units are being installed to monitor smog emissions. Irvine is creating a haven filled with unpolluted nature preserves through city and residential cooperation. The public transportation system attracts many commuters and is a model approach to balancing green ideas and mass transit. 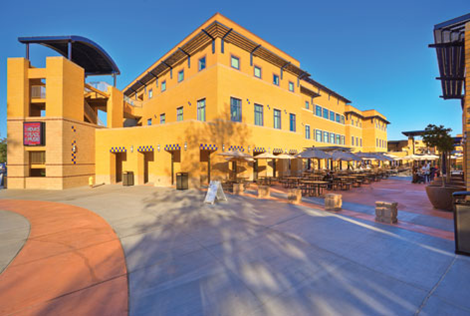 The student center at UC Irvine has achieved a LEED certification of Gold through new plumbing standards that use 42 percent less water, a reflective roof to reduce cooling costs, and ease of access to school and public transportation.